The core functionality of HELIOS 3D is, to place the racks without shadows casted on them on any suitable terrain. This is done in connection with the knowledge about the geographical position of the project area and a reference date and time, that defines the actual angle of the sun. To achieve a shadow free placement, the longest shadow casted in a row is calculated, and the distance for the next row is set to this value (Picture 6). 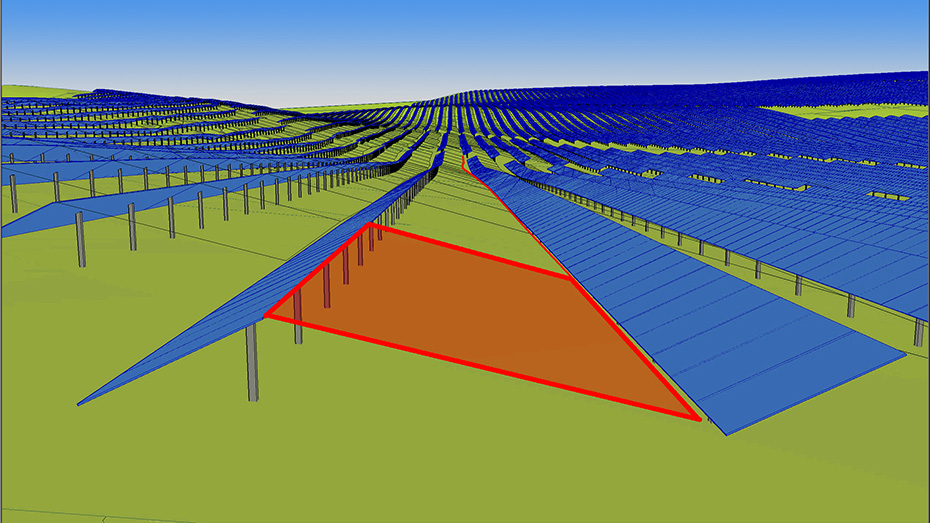 The red shadow lines show the influence of the terrain on the layout and can be interpreted to recognize areas, which could perhaps lead to higher yield, if they are graded to a better shape.

HELIOS 3D is a system for rack oriented layout. The racks, that are spread over the terrain are defined with a rack wizard, eliminating the need to manually draw a single line. A rack is defined by entering the data requested by the racking generator. First a PV-module is selected which delivers dimensions and peak power. Next the physical layout of the modules is defined  in rows and columns and the distance between them. This also defines the active module area for PVSyst.

Basic dimensions, like the height of the modules above ground, and other technically limiting specifications are used to create the overall dimensions of the rack. After this information is entered the wizard will automatically draw the 3D rack.
The parametric functionality of the rack wizard allows for the rack to be automatically updated when any of these parameters are changed. As the parameter for the tilt angle of the module plane is a variable that is defined in the final project, only one table has to be created.

The database handles all this information and even shorter versions of a rack can be defined. They can fill up the end of a row with this smaller rack, if a big one does not fit any more. So the performance ratio of the area is maximized.

The definition also includes limiting parameters (Picture 8) for maximum inclination of the module area and maximum side pitch angle. This insures that racks, that do not match the requirements, will not be used. To give a more realistic appearance for presentations the rack template can be enhanced by inserting an additional detailed 3D model (Picture 7). 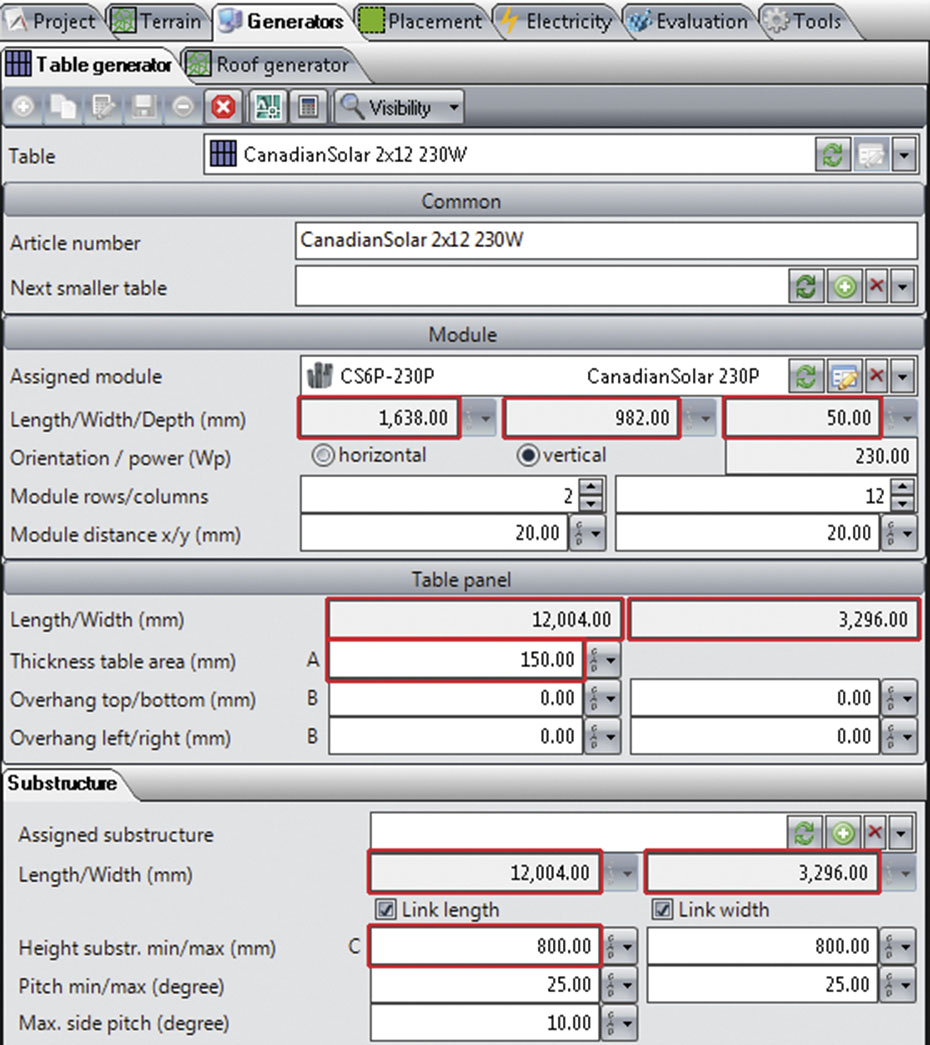 To maximize the yield in a given area, with any given combination of layout parameters, HELIOS 3D has the option to search for the optimal row starting point for a field layout to insure the maximum rack count.

The layout of a plant requires different statically defined racks. The racks on the perimeter of larger fields have to handle higher wind loads and need other statically specs than those in the middle of the fields. Also, varying soil conditions can have an influence on the type of rack that can be used. Therefore in HELIOS 3D any number of requirement type areas with different requirements can be defined (wind loads, ramming depth, number of posts).
This is achieved by drawing polygons to mark the different areas and assigning the defined requirement type to this polygon (Picture 9).
Racks covering different technical specifications for a specific need can now be assigned to these requirement types. During positioning the placement algorithm then switches to the rack needed for this specific area. 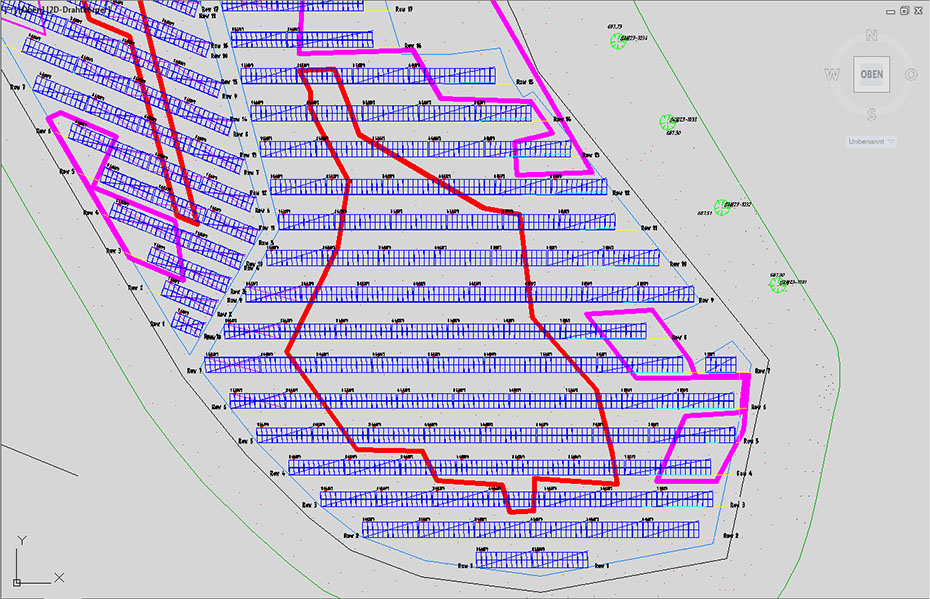 For a reasonable layout HELIOS 3D has functions to structure the area. So areas can be split into fields with a given distance to each other to build an access road (Picture 10). A polyline is used as the basic tool and a user-defined offset from this line allows road creation on the fly. The resulting two new fields are automatically registered. To separate areas for inverter or transformer stations keep out areas can be defined. Various positioning parameters ensure that any reasonable layout variation is possible. The shadow control function instantly shows if the variation makes sense. The positioning function has parameters to meet specific requirements:

After structuring the area it is easy to generate alternative layouts and then compare the variations. The project management of the database keeps track of them. So it is easy to find the most economical solution.

In addition, fine tuning can be achieved because all racks receiving shadow at the specified window of time are clearly marked and indicated by the magenta hatching (Picture 10). So it is easy to detect these racks, if positioning was done with fixed row distance or for tables, where shadow within the racks module area was allowed. This can be used to optimize the electrical layout. The specific racks can be respected for special electrical cabling to minimize electrical power dissipation. A statistical overview of the layout notes the percentage of shaded racks. 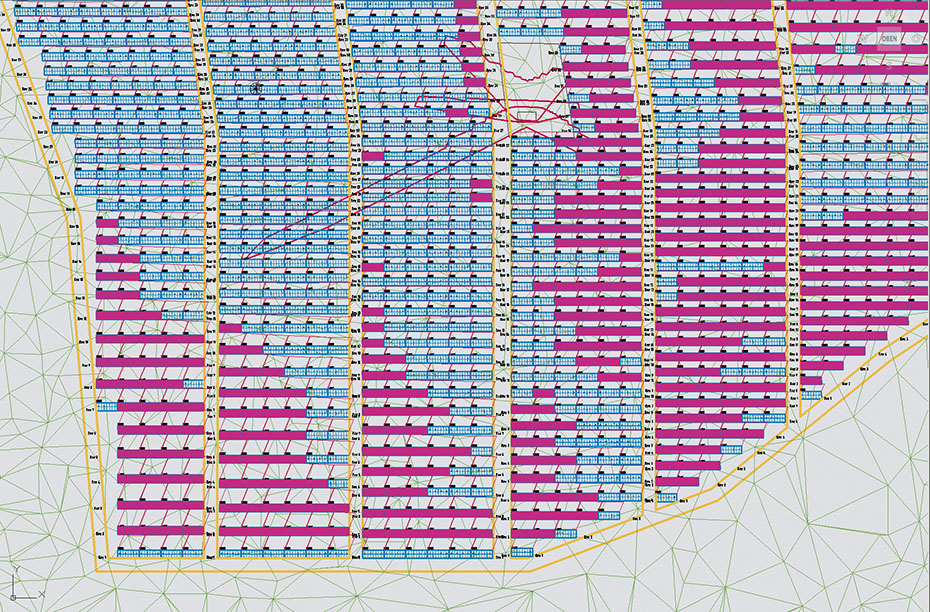 The shadows from external or internal objects, (trees, stations, chimneys) play a big role during layout development. HELIOS 3D has predefined scalable (dynamic) templates that accommodate most shadow casting objects. After positioning of the dynamic shadow objects, the shadows casted from this objects can be calculated. This can be done for a specific time or for a complete day (Picture 11). The resulting shadow areas are drawn as polylines and can be registered as keep out areas (Picture 12).
An additional possibility to optimize yield is our 3D export format for the complete layout. 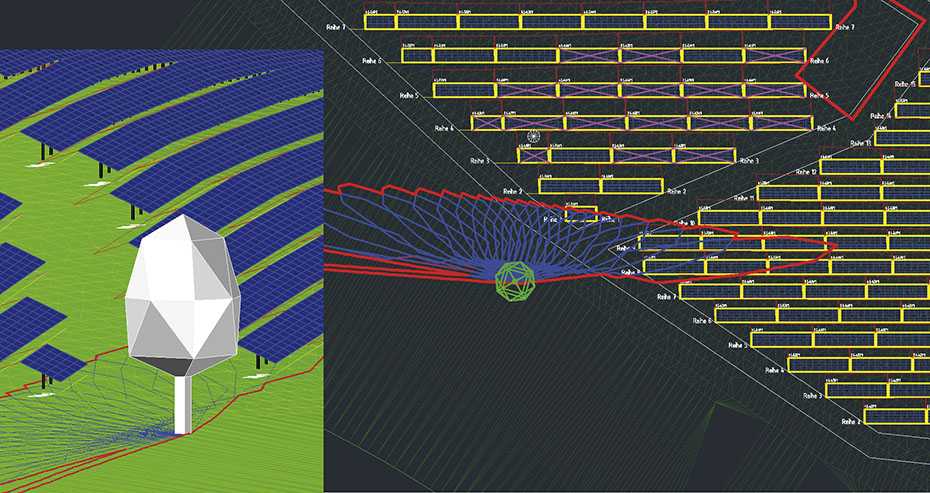 Picture 11 – Shadow Area of a Tree cast during the Day

PVSyst is one of the leading programs for bankable yield calculations. In most cases this is not achieved on base of the complete project. It would be too much work to remodel a big and complex 3D model of the final layout. So normally a representative part of the project is used to do the yield calculation and the total is extrapolated. The drawback of this approach is the fact, that the real near shading cannot be calculated exactly. With HELIOS 3D the complete 3D layout of a project can be exported within seconds and imported into PV-Syst(Picture 13). 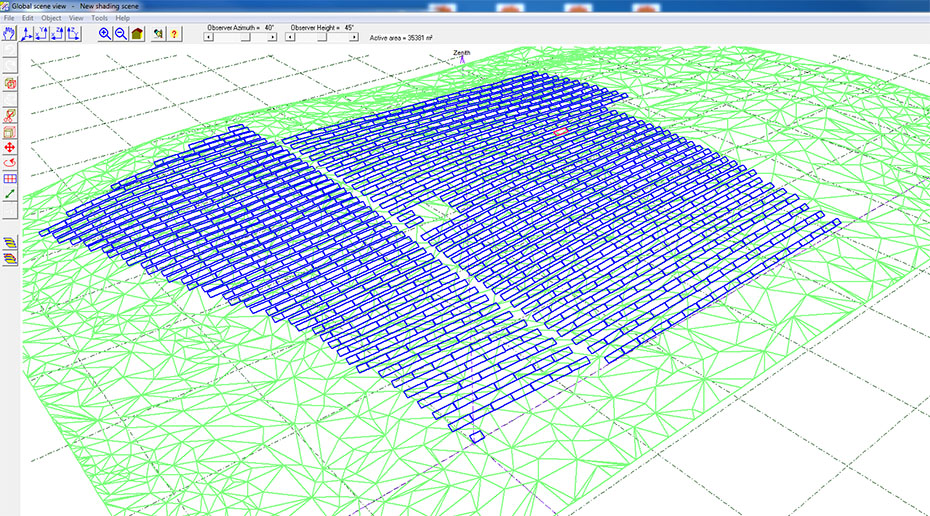 Roof tops are getting more and more in the focus for large scale PV plants. One of the challenging parts in the workflow for such a project is the construction phase of the roof geometry. In most cases there are no up to date construction plans for the roof tops. So site measuring has to be done to obtain the necessary points. In comparison with ground mounted system layout a lot of additional aspects have to be taken into account. While landscapes do not have big differences in height, within a short distance, on roof tops the planes laying side by side can have differences of several feet or even more. Deriving the precise geometry is essential. The other aspect is the shadow casted from this geometry and a lot of obstructions that are present on the roof top or near to it. So getting the shadow planes casted by internal and external objects is very important. 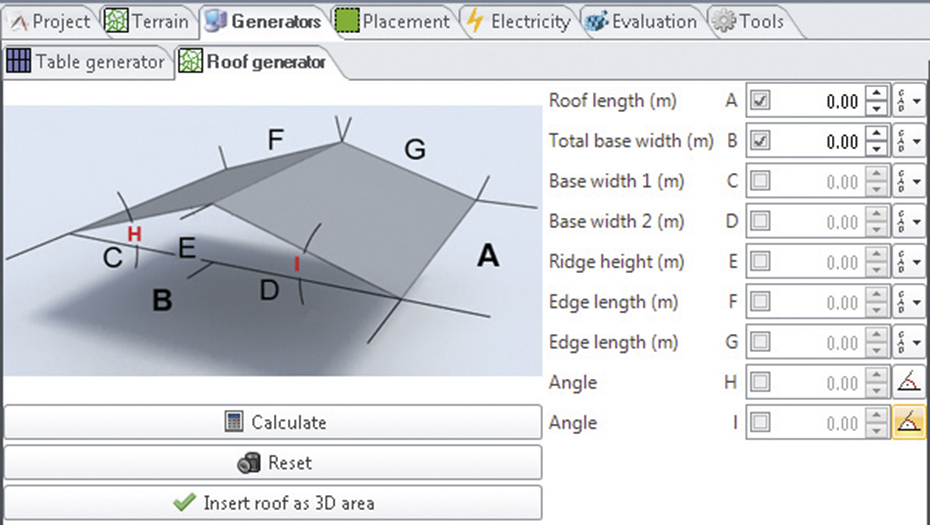 For all this requirements HELIOS 3D has the right tools. The Roof Top Wizard (Picture 14) allows easy and intuitive construction of the relevant planes forming the roof top. It has several approaches to use the information from the site measuring.

The layout for roof tops is quite similar to the ground mounted systems.
After modeling the shadow objects and running a calculation, the projected shadow object geometry (polylines) can easily distinguish areas that should not be covered by modules (Picture 15). 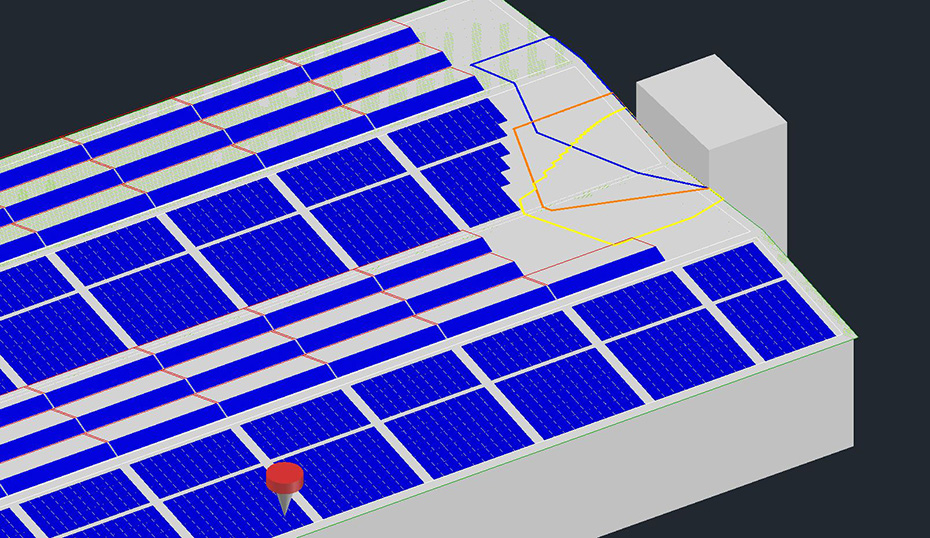 HELIOS 3D has functions for flush mounted, ballasted, and penetrating rooftop applications. The later will be positioned shadow free like the ground mounted systems. HELIOS 3D takes into account various rooftop obstructions such as chimneys, skylights, and HVAC systems with the application of shadow objects and keep out zones.

For flush mounted applications HELIOS 3D has as unique tool to define the physical arrays to cover the roof (Picture 16). After selecting the module and its orientation, arrays of modules can be defined, by setting the number of rows and columns with the module distance for X- and Y-axis. The next step is to define the corridors in X- and Y-dimension between these module arrays. Now the user can simply drag, sweep, and drop the flush mounted modules onto the rooftop surface. Modules are only placed within the field perimeter, leaving out the keep out zones. 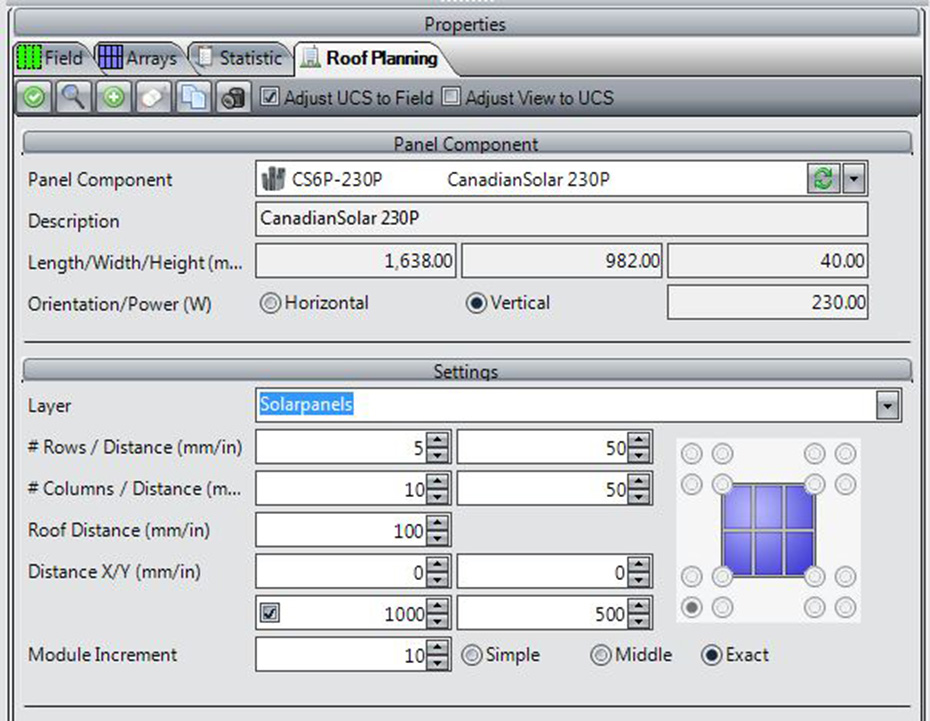 If necessary, the resulting module arrangement can be easily edited by deleting modules or sweeping a selection of modules to the necessary extent.
If penetrating applications are used, all the features for ground mounted systems are available. So placement is shadow free and can have orientation lines for horizontal or vertical adjustment.